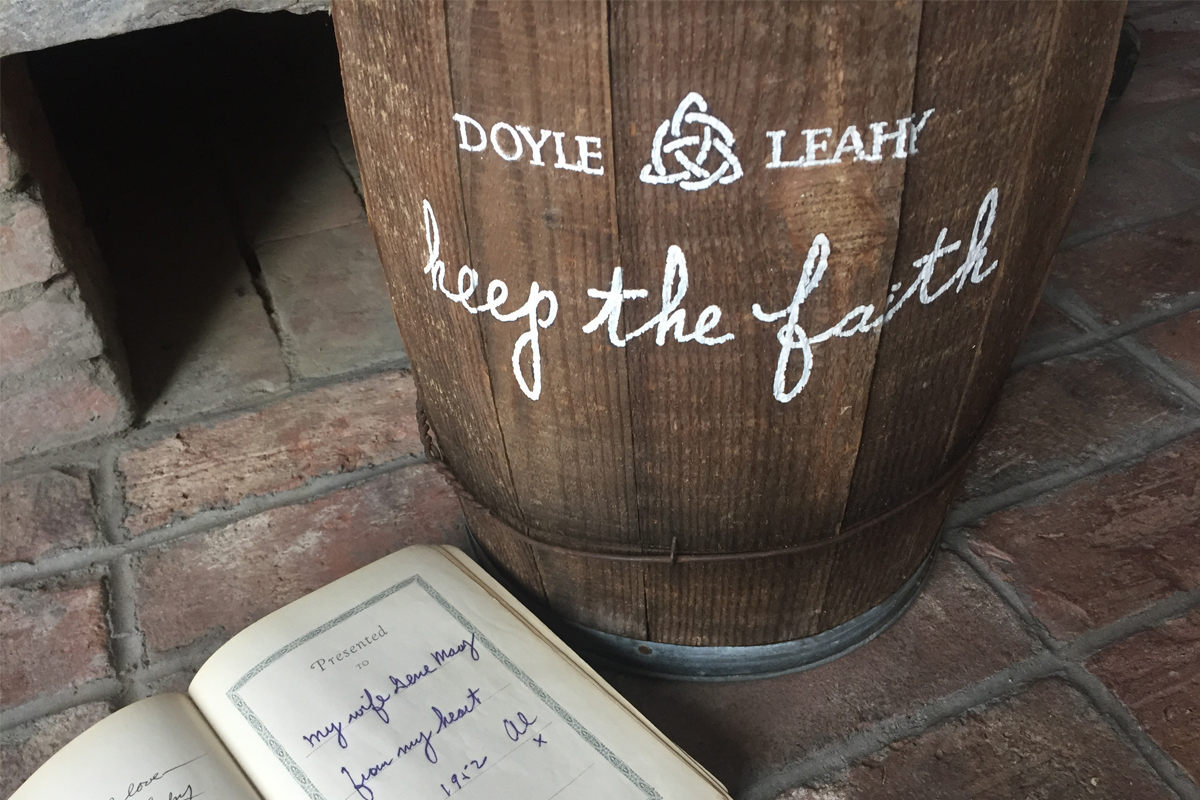 My favorite project is one that connects people to a loved one who is no longer with us. My uncle had an old wooden barrel that he wanted to have painted. He wasn’t sure with what, but mentioned that his dad, my grandfather, never used to say, “Goodbye.” Instead, he would say, “Keep the faith.”

My grandfather died just after I was born, so I never got to meet him. But, I KNOW him through the many stories and recollections of my aunts and uncles. He was known to them as “Pa” and nicknamed “The Lean Wolf.” He worked hard for the telephone company to provide for his family of 11 and instilled a strong work ethic into his children. He knew everyone at the local pubs. Sit him at the piano and he had a crowd gathered around him. His musical legacy lives on through his kids, grandkids and even great grandkids as we often joke that it doesn’t take much to get a party started when there are Leahys around.

I thought it was perfect…”Keep the faith”…such a simple phrase, but so hard to do sometimes. I know Pa and Nana struggled through some very tough times, but they never lost faith. In fact, my grandmother, who had converted to Catholicism, was a pillar of faith for her entire family. My dad had given me the Bible Pa gave to her in 1952. It is now well worn as she used it daily right up until she died. The simple inscription reads, “Presented to my wife Gene Mary from my heart ~ X Al 1952.”

As soon as I grabbed the barrel, I got to work transposing the hand written letter of that inscription to the phrase for the barrel. The only letters I was missing were “k” and “p” but could deduce, based on the other letters, what they may have looked like in his handwriting.

To say this project was meaningful to me is an understatement. It was a connection to my grandfather like I had never had before. I really do think handwriting has a voice and I could almost hear him saying those simple words, “Keep the faith.” I added my uncle and aunt’s family names with a trinity knot between them. I chose the trinity knot for their three girls, probably the strongest reason they have kept the faith over the years. The wood was really rough hewn, but while it was a challenge to paint, it adds to the character of the barrel.

Let me know if there’s something special you’d like to create with your loved one’s handwriting!

1 thought on “Keep the Faith”

I’m not a huge Halloween fan. I kinda skip right

Stoughton Day is this Saturday. Be sure to drop in

Working on some new ideas for ornaments. 25 differ

Raise your hand if you could never ever find your

Worked with mom to create a special piece for her

The start of two identical pieces that also work t